Skip to content
Home » Leadership » Finding a Voice … On the Radio

This work is licensed under a Creative Commons Attribution-NonCommercial-ShareAlike 2.5 Canada License.
About fourteen months ago, while following an online Elluminate conversation about MOOCs between Alec Couros, Dave Cormier, George Siemens, and Stephen Downes, someone made the comment, “Jim Groom should run his ds106 Digital Storytelling course as a MOOC.” I chased down Jim Groom (University of Mary Washington) on the Twitter and the Internet, and learned that the next session of his course was scheduled to start up in January, 2011. With the best of intentions and a new year’s resolution, I formalized my de•tri•tus blog as a repository for elements of the creative that might emerge from any participation. Little did I know ….

While it quickly became clear that my time was limited for daily participation in the ds106 course (at the time I was already deeply involved in The Daily Shoot, which could easily engage me for an hour a day, or more!), I followed the course tag #ds106 on Twitter, and very quickly noted the appearance of something called #ds106radio, the brainchild of Grant Potter from UBC. To say that it quickly became all that Jim Groom seemed to be tweeting about might be an understatement (not an overstatement), but ds106radio quickly took on a life of its own.

Fast forward to August 2011 and the Unplug’d: Canadian Education Summit. Two longstanding ds106radio participants, Giulia Forsythe and Bryan Jackson, were at the summit, and before we knew it, a broadcast to ds106radio was going out to the world via the Papaya Broadcaster app on an iPhone — (this was after the unplug’d part, as we were busing our way back south from Algonquin Park on the 400 highway). Zoe Brannigan-Pipe, Kim Gill, Heather Durnin, Stephen Hurley, and I were all amazed at the ease with which this could be done.

Shortly thereafter, I started to get into the ds106radio streaming gig (@zpbipe’s husband Brad and I debuted with a couple live guitar tunes at midnight on August 12th), and it was a short week or two later that Stephen Hurley and I had an extended conversation about ds106radio in Hamilton, following a dinner meet-up with the cross-North America travelling Alan Levine. Standing in the car park before heading off in our respective directions home, Stephen and I contemplated the unique venue that radio “broadcasting” creates — similar to, but different from podcasting, given that there are no re-dos and “live” is a significant part of the experience. We talked with excitement about the prospect of bringing the ds106radio experience to the public school level. 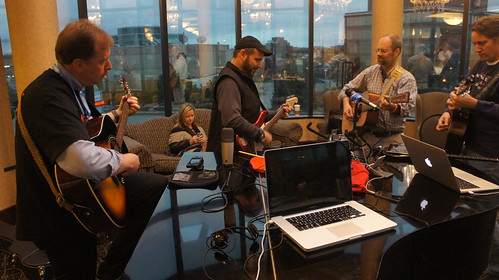 Okay, so “live” is a big part of radio. But there must be more than that. How about community? How about voice?

Just as the blogging medium seeks to engage readers with conversations, listening to familiar voices on a radio stream evokes imagination and stories and listener participation. When listeners can “speak back” in real time via Twitter (as is oft the case with #ds106radio), the folks on the radio easily tie the disparate listeners together in living conversations. Add in the ability to broadcast call-in Skype conversations (say from Tokyo, @scottlo), or host Name that Tune competitions (@shareski and @GiuliaForsythe), or live guitar — or other sounds (@BryanJack and @noiseprofessor), or spontaneous day-to-day life (@DrGarcia), or cross-country treks and conversations (@CogDog), or living-your-dream radio shows (@StephenHurley) — and you truly have a living community. As members migrate around the globe and explore new experiences (@onepercentyellow, currently in Peru, or ds106radio founder @grantpotter, recently in Halifax for his birthday Kitchen Party broadcast), the community shares with one another. Some of my favourite new music in the past year has brought to my attention via #ds106radio by @easegill from the South Pacific. The voices of the folks involved, as is oft the case with traditional radio, become capital-letter Voices that are influential in our day-to-day lives.

And so. An evolving, collaborative, sharing community. That’s what we’re looking for in our learning spaces, yes? Another way to give voice to our learners?

As we continued to explore the #ds106radio medium through the fall of 2011, Heather Durnin and I had a number of conversations about the possibility of creating an extension to The Idea Hive, the learning space that she shares with Clarence Fisher. Contemplating timelines, we talked of getting things going in the new year, and following a good number of Sunday afternoon Skype and Twitter conversations over the past few weeks, 105thehive.org was recently born. We joked about how it was as if #ds106radio had had a child.

Heather talks about her first experience going on the radio in her post, “105theHive Student Radio: A New Learning Space,” and her story is not unlike my own. Going live on the radio is one of those experiences that, having done it, gives you another level of comfort in sharing and collaborating. Trepidation, perhaps, the first time, but the community is supportive. And that’s what we’re looking to create for our students. A supportive space for them to develop new skills and voices. Whether it be playing an instrument, offering some personal thoughts on some favourite music, sharing views through a live conversation, or posing questions for the listening community, “going live on the radio” is valuable venue within which to explore, create, and find a voice.

So. Heather’s students will be taking the lead this coming week, with their first live broadcast set for 12:00 noon (EST) on Tuesday, February 28th. I’m hoping that my own students won’t be too long in joining them. Broadcasts can be recorded, and will, over time, form the basis of a collection of rotating content. In the interim, should you tune in to 105thehive.org (like right now, you know you want to!), you’ll be treated to a continuous stream of music, much of it shared under Creative Commons licensing.

Listening is as simple as loading 105thehive.org in your web browser and clicking the “Listen to the Stream” link. If you want to go fancy and use a streaming client app like FStream or Tunein Radio on an iDevice (or Tunein Radio for Android), simply use the URL 105thehive.org/stream/ to listen in.  Or, if you’re here, you can simply click on the play button below to hear the current stream:

7 thoughts on “Finding a Voice … On the Radio”