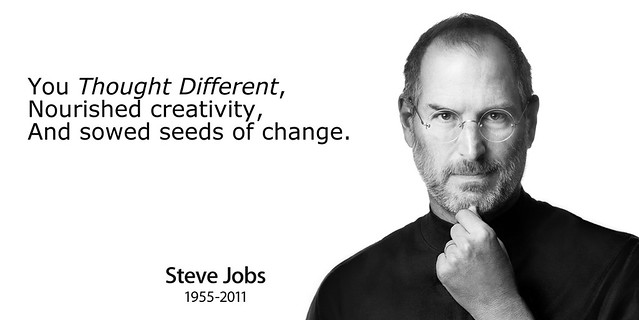 We learned this evening that Steve Jobs has passed away. The founder and visionary leader of Apple, Inc. had announced a month or so ago that “the day had come when he could no longer fulfil his obligations at Apple, and that the time had come for him to step down.” Having been on medical leave since January, the news suggested that his health concerns had continued. And now we know that must have been the case.

To combat the sombre tone of the news, I chased down some music reminiscent of Steve’s vision and dreams, and together with a recording of his 2005 Commencement Address to graduates at Stanford, and shared a broadcast on #ds106radio at around 9:00 pm. During the broadcast, some thoughts and memories started to emerge. I’ll share those thoughts in a subsequent post. For now, here are some excerpts from selected lyrics from the playlist.

“When you dream, what do you dream about?”
—  from When You Dream by The BNL

“A man has dreams of walking with giants
To carve his niche in the edifice of time
Before the mortar of his zeal
Has a chance to congeal
The cup is dashed from his lips
The flame is snuffed aborning
He’s brought to rack and ruin in his prime.”
— from A Man Has Dreams from Mary Poppins

“I’ll give you panavision pictures, ’cause you give me technicolour dreams …”
— from Technicolour Dreams by The Bee Gees

“Cheer up, Sleepy Jean.”
— from Daydream Believer by The Monkees

Here’s to the crazy ones. The misfits. The rebels. The troublemakers. The round pegs in the square holes. The ones who see things differently. They’re not fond of rules. And they have no respect for the status quo. You can quote them, disagree with them, glorify or vilify them. About the only thing you can’t do is ignore them. Because they change things. They push the human race forward. And while some may see them as the crazy ones, we see genius. Because the people who are crazy enough to think they can change the world, are the ones who do.

The words from Apple’s Think Different campaign seem to describe Steve Jobs to a T.

* Gizmodo has a great Steve Jobs Tribute Video based on the “Think Different” audio.

6 thoughts on “Reflecting on Steve Jobs …”