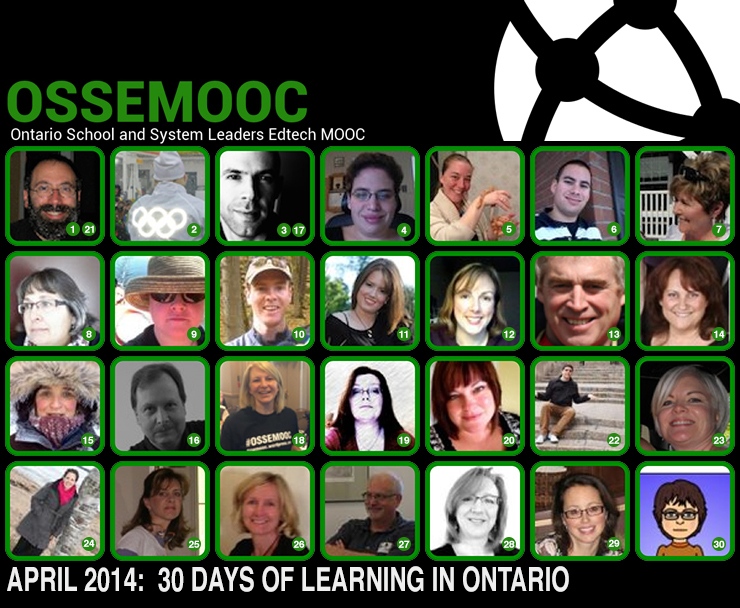 Ontario educators Donna Frye and Mark W. Carbone have been spearheading the Ontario School and System Leaders Edtech MOOCommunity this spring. In April, the OSSEMOOC blog shared 30 guest posts, one each day, written by Ontario educators as they reflect on aspects of their own professional learning over the past month.  The broad prompt for the posts was “What Did I Learn Today?” and today Donna and Mark continued to encourage us all to make our own professional learning more visible and more collaborative:

We all have a story to tell, and we learn from each other. Together we are stronger and wiser. Connected learning takes many forms: observing, reading, asking, reflecting, writing, speaking, audio, video and collaborating. Connected learning and leading is a participatory culture. It takes time, time to jump in, time to create new routines and time to build comfort. Courage is needed to put yourself “out there” and find your voice. It is worth the risk to gain insight, broader perspectives and recognize that “the smartest person in the room is the room”.

from 30 Days of Learning in Ontario: What Did We Learn Today? (posted today, May 1st)

If you did not have an opportunity to follow the 30 Days of Learning in Ontario, I invite you to relive the experience by reading and commenting on the following posts from the past 30 days!

As we advance into the month of May, the Ontario School and System Leaders Edtech MOOCommunity will move ahead to explore the topic of Digital Citizenship, and I look forward to following, and participating in, the conversations that ensue.

Join in by following @ossemooc on Twitter, by monitoring the #ossemooc tag, and keeping an eye on the OSSEMOOC blog. While I had originally thought I might take in #edCampSWO (SouthWest Ontario) in Tillbury, ON at the last minute, it turned out not to be the case. Add to the mix a similar interest in also attending a second Ontario #edCamp being held on the same day in the same end of the province, #edCampLDN (London), and the dilemma truly magnified. What to do?

The OSEEMOOC spearheaded by Donna Fry (@fryed) and Mark Carbone (@markwcarbone) has been underway for a little over a month now, and Donna’s current challenge to Ontario educators is to share a “What Did I Learn Today” post with the community.   With this in mind, I decided to undertake to explore a “What CAN I Learn Today?” question, with the focus of following two Ontario #edCamps from afar.

I will admit to a strong bias in favour of face-to-face learning with Twitter colleagues at an actual event. Twitter conversations last night with Rodd Lucier (@thecleversheep), Brenda Sherry (@brendasherry), and Peter McAsh (@pmcash) reinforced for me that a significant effect of #edCamps and other such gatherings is the opportunity to converse with educator colleagues and friends between the sessions. It’s difficult to replace that in-person presence. Having been involved in the organization of #edCampQuinte (3 camps back in 2011), and having attended #edCampToronto (twice), #edCampWR (twice), #edCampOttawa, (as well as following the original #edCampPhilly remotely via Twitter), I’m firmly convinced that in-person attendance is the ideal way to go.

However, knowing that I would be attempting to follow the conversations and the sessions from a distance, my efforts switched to looking for a variety of ways to capture experience and the discussions occurring within and via the ether of the Internet.

Screen captures of the Twitter clouds from #edCampSWO and #edCampLDN

The static screen capture above doesn’t do the clouds justice. Click below to view the actual dynamic interactive archives – they’re amazing! Because the schedules at most #edCamps are participant-generated in real time from grass roots interests during the events themselves, a pre-posted schedule is usually avoided. Normally, the session board is compiled following a crowd-sourcing exercise involving either sticky-post-it-notes or whiteboards. But it got better.

Not only was the #edCampLDN schedule posted online, but each entry included a link to a blank gDoc for collaborative note-taking! Great thinking!   I quickly paged through and pasted in a request to each document to capture the name and twitter handle of the session facilitators for later followup.

But what about #edCampSWO? Surely such a system might provide useful for collaborative note-taking there as well? What was required to support a similar opportunity there?

By 12:30 pm I had followed through with steps 1-3 above, and by 1:00 pm had incorporated the recently-added afternoon entries to the schedule and and linked gDocs for the remaining sessions.  Shortly thereafter there were responses from Michelle Korda (@KordaKovar), Emily Fitzpatrick (@ugdsb_missfitz), Michel Grimard (@miche4195), Brian Aspinall (@mraspinall), Mary Alice Hanson (@Ms_Hanson) expressing interest in the shared note-taking endeavour. #edCampSWO Session Board in Google Docs

The invitations stands for any and all attendees at #edCampSWO to transfer your notes, links, thoughts and ideas into the shared note files.

#edCampSWO had a post-lunch keynote by Ontario’s “Grandfather of EdTech” Doug Peterson (@dougpete). As it turned out, the keynote was shared from #edCampSWO to #edCampLDN via Google Hangout, and so the opportunity for shared note taking between both venues was enhanced — as well as providing an opportunity for me to join in and see Doug’s presentation. As it would turn out, the notes in the gDoc are mostly mine.   It was nice to connect briefly with #unplug’d12 friend James Cowper (@cowpernicus) who set up the Hangout, and to bring in #ECOO and #edCampQuinte colleague Peter McAsh (@pmcash).  These are all some folks I would have been catching up with F2F, had I actually been in either Tilbury or London today in First Life.

After Doug’s keynote, I again re-issued the invite for folks at #edCampSWO to collaborated in the shared notes, and then went back to monitoring the Twitter stream. At around 2:30, a few spammers started to join in the #tags, which prompted a question in the stream as to whether the #edCamp conversations might be trending. Trending conversations attract these silly spambots. Trending tags (both #edCampSWO and #edCampLDN are there) as shown by trendsmap.com at around 2:30 pm April 12

Conversations in Other Online Spaces?

Earlier in the day (at 10:48 am my text document indicates) I noted to myself that I tend to monitor things from the Twittersphere for the most part — and I wondered at the time if there were #edCampSWO and #edCampLDN conversations going on via other networks — Google+ and Facebook specifically. At around 4:00 pm, as the #edCamp goodbye and thank-you tweets were flowing, I looked in on both the other two networks and did searches for both of the Ontario #tags.

So, No. Real-time conversations tagged with #edCampSWO and #edCampLDN were essentially only happening within the Twitter online space.  Not a real surprise, as Twitter has been extremely effective among those Ontario Educators who have embraced social media over the last half-decade. Google+ was kind of late to the party, and Facebook tends to reflect a more personal, rather than professional focus.

So. What DID I Learn Today?

Do We All Need a Designated Person-On-The-Ground? Or Can We Be That for Each Other?

I recall with fondness asking tweeps Danika (@DanikaBarker) and Zoe (@zbpipe) and Doug (@dougpete) to act as my personal Advance-Person-On-The-Ground in their respective parts of Ontario to keep an ear to the ground for the as-then-yet-unannounced dates of opening for new Apple Stores. That’s another story, but the idea of having someone working with you in another location is a powerful one.

It would be a difficult task to line up individuals for all the various sessions happening at a distant event (especially when #edCamp attendance and session topics are determined rather more spontaneously than other conferences) — but the idea of a collective, collaborative shared Team-On-The-Ground acting collaboratively for others is a powerful one.

It would be wonderful to see this become yet another characteristic of the evolving, grass-roots #edCamp experience.

So, What Did YOU Learn Today?

I look forward to reading the still-accruing notes and yet-to-come blog posts from both #edCampSWO and #edCampLDN. And looking back through the Twitter stream to search out photos to help visualize the events. I know that there is a lot of learning that will follow on from today — seeking it out and making use of it is both the challenge and the adventure.  🙂

In the interests of helping to aggregate posts that come from today, these Google forms may come in handy. Please consider sharing your thoughts and your learning!

What did you learn today?