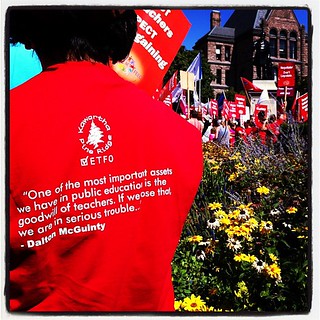 January 3rd, 2013 was a sad day for Ontario Educators, for Education, and for the democratic rights of Ontarians.

Kudos to Dave Lanovaz (@DaveLanovaz on Twitter) for posting his open letter to the Premier of Ontario on his blog Thursday morning. Check out the conversations in the 65 comments posted there in the last 36 hours.

If you’re not from Ontario or haven’t been following the education drama here over the last few months, you can read details of Thursday’s news in Doug Peterson’s post, The Hardest Job, as shared on his blog Friday morning.

All in all, neither a Merry Christmas nor Happy New Year for those of us dealing with an unwillingness to budge on the part of the Minister of Education, her negotiating team, and the Liberal Government.

However, on the upside, there was an opportunity for some language learning lessons for the Minister of Education, Laurel Broten (@LaurelBroten on Twitter), as reflected in a number of conversations Thursday morning on Twitter.  (Note that even though the Minister of Education’s Twitter account immediately followed a lot of Ontario edTech leaders when it was first created (who gave her that sage advice?), she has never once replied to any of my DMs or mentions. (Like the time on August 28th when I personally invited her and @Dalton McGuinty to come out of Queen’s Park and meet with us on the lawn during the #rally4edu.) Nothing. Not interested in listening or talking, I guess. 😥

So. On with the language learning opportunities for Minister Broten and the government:

In reflecting on the words Ontario’s Education minister yesterday morning, it seemed as if the actions of her government were at odds with the language in use.

Broten announced Thursday that the minority Liberal government will impose the contracts [collective agreements] on approximately 130,000 elementary and high school teachers under the controversial Bill 115 before students are set to return to the classroom on Monday. from CTVNews.ca

In seeking to provide a bit of commentary and perhaps some tension-breaking levity (thanks, Alana!), I posted the following update on Twitter.

I was increasingly amazed throughout the day as my phone continued to beep and chirp every time someone retweeted or favourited the tweet. Imagine my surprise Friday evening when a Twitter summary email (“the following users have tweets for you”) listed that @msjweir, @mkgoindi, @tk1ng, and 37 others had RT’d the update. Seeing that, I clicked on the View Details button and grabbed this — four hours since the summary email had added another 20 odd additional retweets. Go figure. Another one popped up as I was writing this! 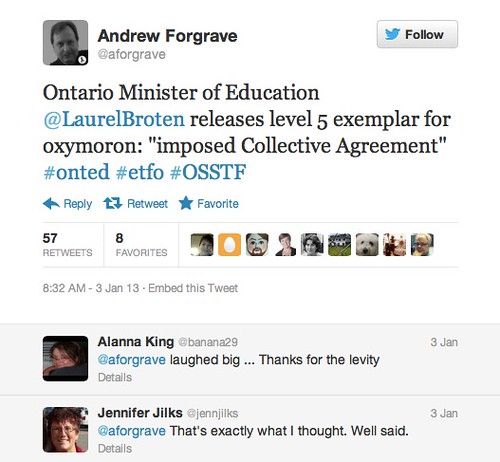 I do my best folks. Every once in a while something like this resonates with people. I think we all see and understand the deep unintended irony inherent the Minister’s words and actions.

But that wasn’t all.

Broten also announced that the Ontario government will now move to repeal the bill – known as the Putting Students First Act – as it “has achieved what it was put in place to do.” from CTVNews.ca

Continuing in the soul-saving spirit of humour, @acampbell99 shared a definition yesterday morning of a new verb, “broten,”

This morning I received my latest copy of The New Ontario Education Dictionary of Words (it is updated daily), and, just to check, I turned to the appropriate page. And there it was.  (Coincidentally, this is quite an interesting collection of consecutive, yet somehow relevant words!!) 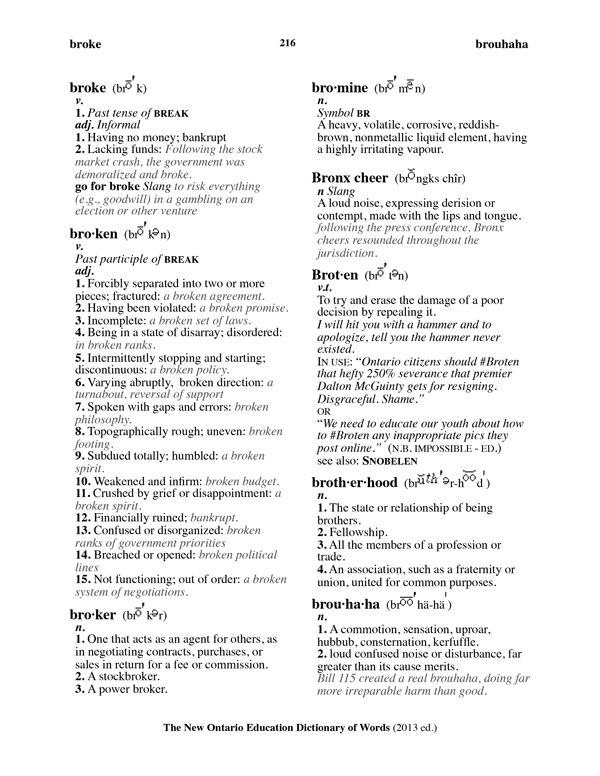 One final note. I thought I was having a conversation yesterday with the Liberal Press Office on Twitter. In receiving the mention from the Media Office account (@LibPressSec) in response, I checked out their Twitter updates and found that there were perhaps 6-10 updates that were being posted, over and over again, directed at various folks who where clearly commenting on the day’s events. Rather than engaging in conversation with the folks posting on Twitter, the account was simply re-using the same statements, ad nauseam. The one that I received had a problem with the participle. (It wasn’t the only one with that error, but I saw it reposted over and over unchanged.) I don’t know if they ever #brotened it or not, as per my suggestion. They were probably not listening either.

However, now that these little language lessons have been carefully documented, I’m most certain that their learning will commence.

With over 130,000 educators in the province on the job, the government will be sure to get the message.